What is a Mix Network?

A mix network (also known as a mixnet) is a type of anonymous communication network that protects the communication between individuals on the network with protocols that resist traffic analysis. While most current internet traffic is encrypted to protect its contents, analyzing traffic patterns can leak a staggering amount of metadata that allows attackers to infer identity and relationships between users as well as the potential nature of the content of their messages. Encryption provides message confidentiality and integrity but does nothing to hide who is sending and receiving said messages. The identities of the communicating parties using the Internet Protocol (IPv4/IPv6) are typically leaked to many intermediary Internet infrastructure operators in the network.

Other examples of metadata leaked by common network protocols include:

An encrypted messaging system that leaks the identity of message senders and recipients also leaks entire social graphs of its users. Often these so-called “secure messaging” systems are a group of centralized servers owned by one company, such as Amazon web hosting. These systems act as focal points for metadata collection by a variety of parties, including retailers and government actors.

Since David Chaum published his seminal paper on anonymous communication, “Untraceable electronic mail, return addresses, and digital pseudonyms” in 1979, over 40 years of academic research have taken place to explore potential anonymous communication options. However, mix networks remain the most practical in terms of computational overhead, latency, and bandwidth overhead.

Other options currently available for anonymous network design tend to have downsides that limit their performance. Tor is the most widely used anonymous communications network; however, it does not offer strong anonymity properties. Tor can be trivially broken with short-term timing correlation attacks. With clear benefits and protection against such attacks, mix networks remain the best option for strong anonymity on a massive scale.

That being said, all anonymous communication networks face a kind of tension in striking a balance between latency, bandwidth, and anonymity. This typically means that you can have strong anonymity and low bandwidth or strong anonymity and low latency but not both. The details of this are described in the paper “Anonymity Trilemma: Strong Anonymity, Low Bandwidth Overhead, Low Latency - Choose Two”.

Mix networks are message-oriented and are usually only designed to support low-bandwidth applications with at least some latency tolerance. In the case of the xx network (also known as the Elixxir mix network), the first application of the network is in xx messenger, an encrypted messaging platform where users can participate in one-to-one and group chats.

The root of all authority within a mix network is captured in its PKI system, making decentralization of this component a top priority for developers. If the PKI system were compromised by an adversary wishing to violate the privacy of a mix network, they could do so by replacing the network’s mix nodes with their own where all the secret key material is known to them.

A mix is a specialized cryptographic router that hides the link between incoming and outgoing messages from the perspective of a passive network observer. The mix node receives many messages and then uses bitwise unlinkability and added latency to prevent a passive network observer from knowing which incoming message corresponds with which outgoing one.

Messages undergo cryptographic transformations by the mix node, a process that creates bitwise unlinkability. xx network messages are highly secure in this regard: outgoing messages cannot be linked to incoming ones via bit patterns contained in the message data.

Mix nodes also need to add latency in order to prevent attacks that are correlated with timing patterns. The xx network, for example, is a batch mix with 1000 message slots. A passive adversary would have a probability of 1/1000, or a .1% chance, of guessing which outgoing message corresponds with an incoming message.

Some latency is created by waiting for messages to arrive. Currently, the xx network has an overall latency of about 2.5 seconds. In comparison, continuous-time mixing strategies such as Stop and Go or the Poisson mix add random latency for each hop through the mix network. Furthermore, these approaches must be tuned so that mix nodes always have some messages dwelling within their mix queues, which is a more complicated balance to achieve.

A single mix is enough to ensure a strongly anonymous platform that protects user data. However, a single mix also means a single point of failure. Therefore, mix networks use many mixes, at least three, for each route through the network. Ideally, these mix nodes would be operated by several entities that are proven to be reliable and trustworthy. 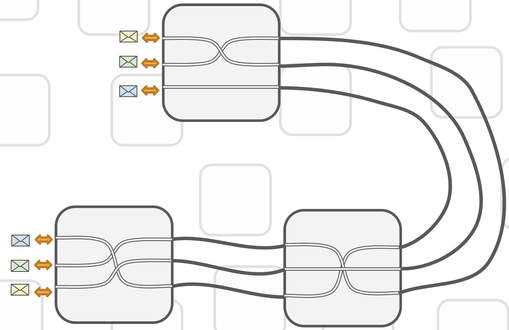 A mix cascade is a fixed ordering of mix nodes that collaborate in routing messages. For example, there could be three mix nodes in a cascade: an entry mix, a middle mix, and an exit mix. The entry mix sees the client’s locations (e.g., IPv4 addresses). The middle mix is not able to see client sources or destinations. The exit mix only sees the message destinations. However, as long as one of these mixes is honest and accurate, the input/output message unlinkability property needed to guarantee privacy is upheld. This type of network is referred to as the Any Trust security model, a term coined by Bryon Ford in his papers such as “Scalable Anonymous Group Communication in the Anytrust Model”.

There are dozens of mixing strategies and several ways to categorize them, including:

Similarly, there are many possibilities for mix network topologies, including:

For an interesting discussion of the pros and cons of various network topologies, see “Impact of Network Topology on Anonymity and Overhead in Low-Latency Anonymity Networks”.

cMix refers to a verified mixing strategy where the mix nodes can provide proof that mixing was done correctly. cMix is designed to be used with the multi-cascade topology where the mix network’s PKI publishes numerous mix cascades that clients can choose for routing their messages over the network.